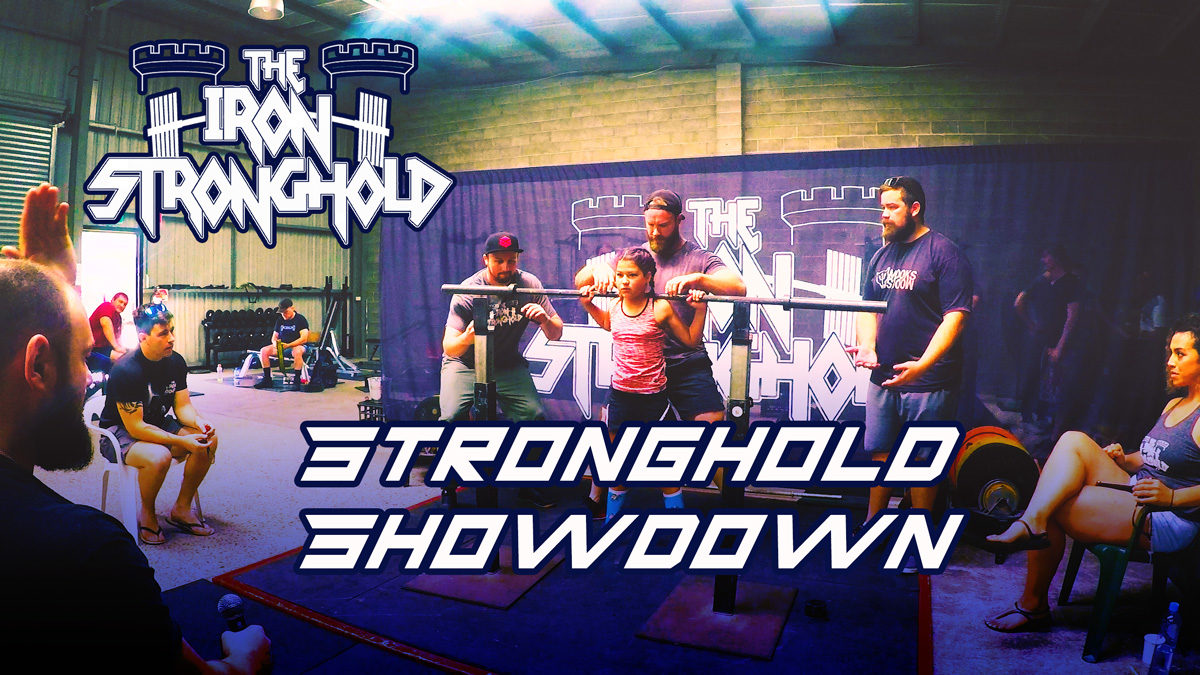 17 of the gyms bravest ventured forth into the Stronghold on this glorious day. 17 emerged as victors over gravity!

To begin the onslaught, Bella our youngest member put on a spectacular show. At 10 years of age she Squatted 20kg, Bench Pressed 20kg and Deadlifted 45kg! Barbella brings a infectiously joyous persona to our competitions and shines on and off the platform as an amazing young lady. I’m looking forward to seeing Bella continue to bring her smile to the gym and grow into a succesful lifter and person! 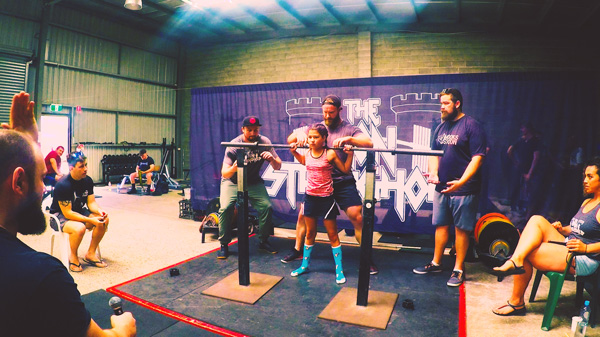 Next to take the platform was Brendan Dean. The young warrior of Iron awoke on the morn as an uninitiated. In the afternoon he was an Iron Ascendant and joined the ranks of The Iron Legion Powerlifting team! Brendan executed the plan perfectly going 9/9 with an 85kg Squat, 65kg Bench and a 115kg Deadlift. 265kg total to set the stage for his further ascendance! Great lifting Brendan. 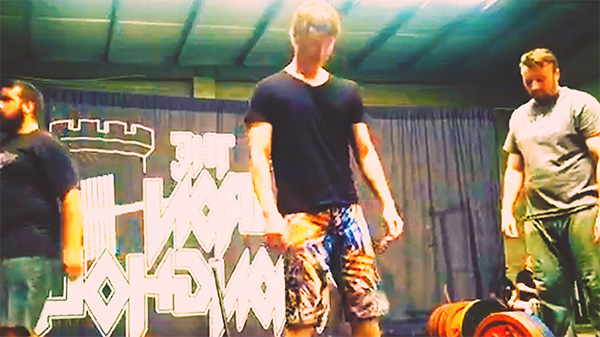 Also joining the ranks of the Legion, Dan Posthuma. His first competition. His willingness to give it his best was apparent, his calm, collected demeanor uplifting all those in his aura. The day started with a simmer but finished with an explosive finale! Hitting a 110kg Squat, 77.5kg Bench Press and a 115kg Deadlift. 302.5kg total. Setting the stage for Dan’s journey! 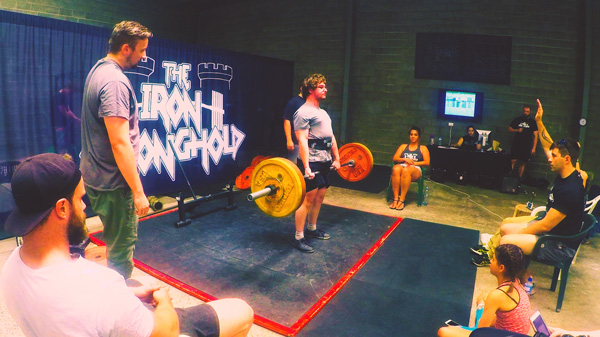 Next up, she’s no stranger to weights but her presence has been unseen on the platform… Until this day. The captivating Danyelle Anderson. In her first ever powerlifting competition she captured the crowds attention with a 105kg Squat, 55kg Bench Press and a 120kg Deadlift. 280kg and 3rd place in the Female division! Great work Dany, was awesome to watch you lift! 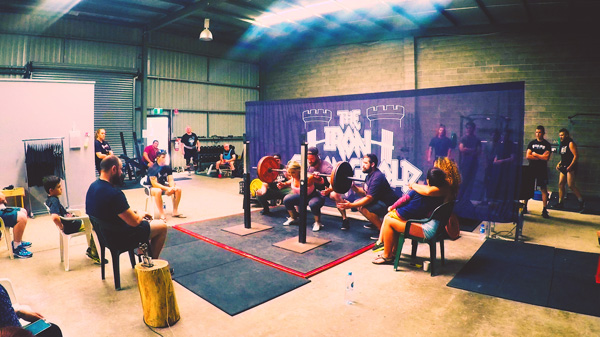 Tony Harrington is no stranger to the platform. What Tony has lacked in consistency this past year in training he makes up for with passion. Tony is like a roaring fire when he competes, when he stands under the banner of the Legion all are inspired! His training leading into the comp has been consistent, his performance on the day was electric, his potential untapped. 85kg Squat, 55kg Bench and a 130kg Deadlift. Great lifting, to be improved upon in future attempts! 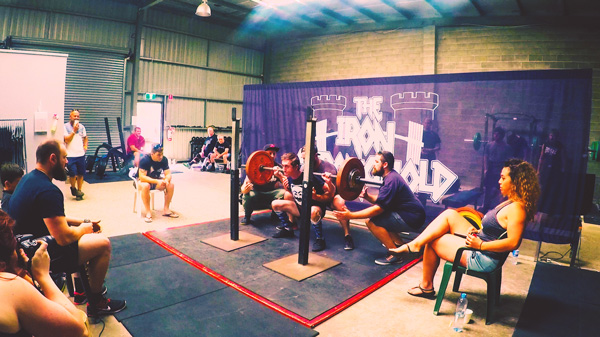 Jess Lord hadn’t competed in Powerlifting before this day and up until 2 minutes before lift off she wasn’t planning on it. Safe to say she is glad she did! Our newest member, Jess has just recently moved to the area and with her previous training experience in Crossfit came along to show everyone what she’s got! 95kg Squat, 60kg Bench, 135kg Deadlift and a 290kg Total taking out 2nd place! Great lifting Jess! 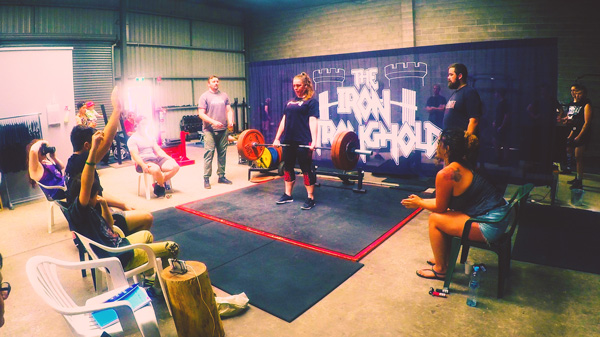 Nerae Peters, in her best performance to date came out with the well deserved win. Her experience showed on the platform and her attempts were nailed with perfect execution. She finished with a 115kg Squat, 65kg Bench Press and 140kg Deadlift. 320kg total and the winner of the female class! Great lifting after a great training cycle leading into the competition. Good work Nerae! 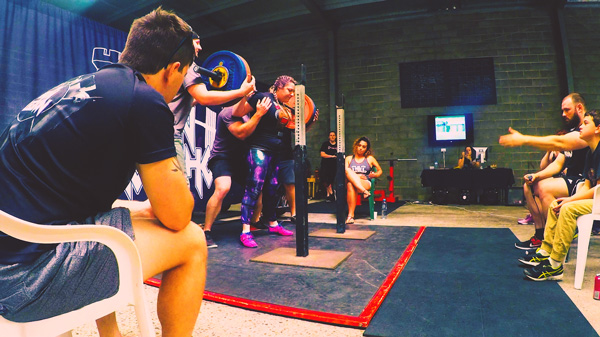 Jorden Dakis. Making his return to the platform after a long time away. Time he has seen put to good use. Jorden has grown into a fine young gentleman and a fine young lifter. His technique outstanding and his calm attitude a reflection of his performance. 115kg Squat, 80kg Bench Press and a 150kg Deadlift, 345kg Total. Looking to improve on this in future competitions! 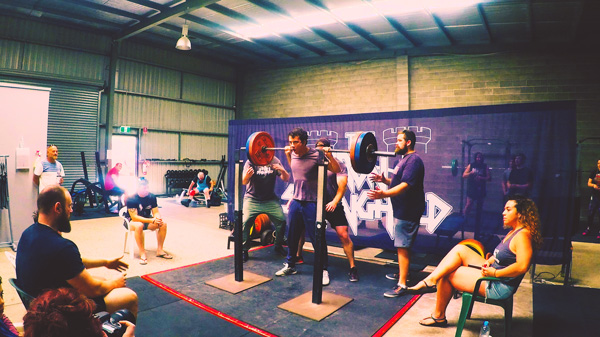 Making his way up from Melbourne, Nic Lyons is an original gangster. Training out of SCB in the garage days he’s been back in the gym hitting the weights hard. Coming up for a day of lifting and fun with the Stronghold team Nic had a smooth day on the platform hitting a 115kg Squat, 60kg Bench Press and a 152.5kg Deadlift, 327.5kg Total. Great work Rocky, looking forward to seeing you move forward with these numbers! 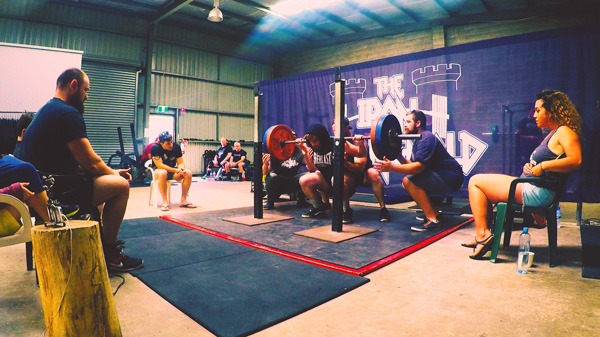 Jordan Chapple-Stroud made his return to the platform as well. After his first competition in January at the Stronghold Powerstrength weekend he has been putting in the work required to move ahead recently and it’s paid off greatly. Jordan hit a 115kg Squat, 77.5kg Bench Press and a 152.5kg Deadlift, 345kg Total! A fantastic day for Jordan, setting a great example for everyone. If you put in the work you get the results. Keep your eyes on Jordy as he’s a bright upcoming lifter looking to make his mark on the record boards! 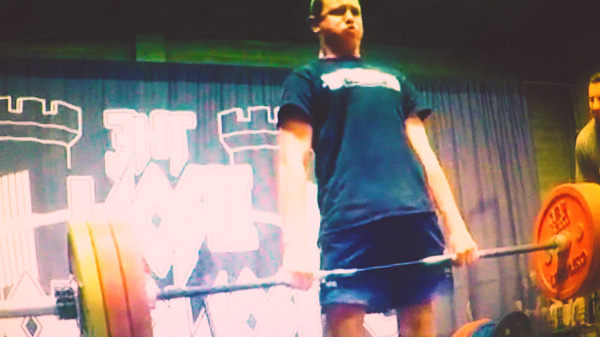 Dan Whitaker has had his fair share of set-backs this past year or so but he’s really stepped up coming into this competition. Hitting his training hard and nailing his rehabilitation work after experiencing shoulder issues. He came into this competition looking to have fun and hit some heavier numbers, his efforts exceeding his expectations! 100kg Squat, 70kg Bench and 160kg Deadlift, 330kg Total. Not an all-time PB but he’s set the stage to improve upon these lifts at the next comp. Great work Dan. 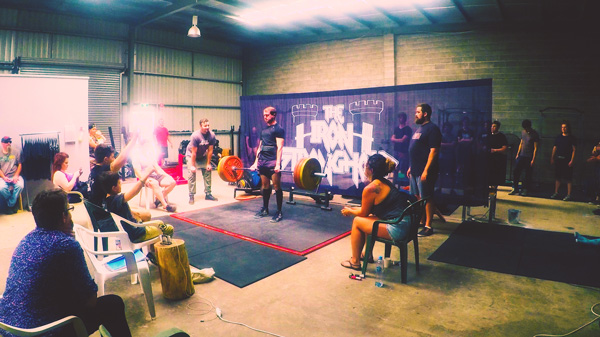 Ian Childs has competed at many of our comps, Ian has many years of competing behind him but he continues to improve. A true veteran, always one to help others out and to lend his knowledge to all of our members. He’s a great example of the benefits of lifting weights. His day ran smooth with a 155kg Squat, 72.5kg Bench and a massive 205kg Deadlift giving him a 432.5kg total and 3rd place in the male category! Great work Ian. 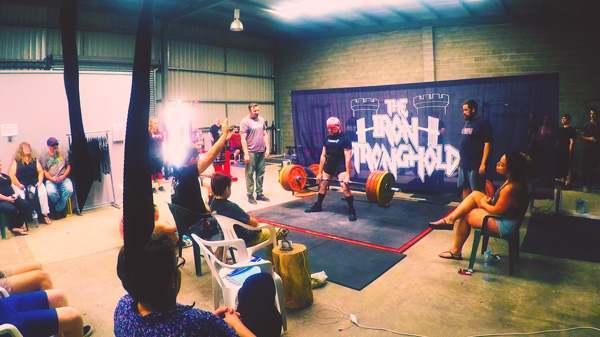 Young Blake Harris has been training at the stronghold for a few months now and he’s really made a name for himself as a strong lifter with an even stronger character. Always with a smile on his face he is a great asset to the gym. His lifting today setting a great example for all those who are making their way to the platform. 150kg Squat, 102.5kg Bench press and a 195kg Deadlift, giving him a 447.5kg Total and 2nd place! Great work Blake! 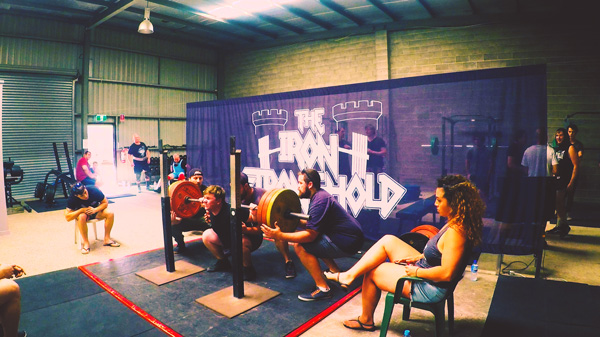 Aaron Gorsch, our male winner. Aaron had his best prep to date leading into this comp. His lifts were looking good, he was composed, he had everything locked down tight. Due to unforeseen circumstances Aaron was unable to keep his weight up coming into the comp and weighed in nearly 5kg under his normal weight. Not one to shy away from a challenge, Aaron came in and performed spectacularly well given the circumstances. 185kg Squat, 137.5kg Bench and a 210kg Deadlift. 532.5kg Total and first place. Great work today mate, an absolute asset to the gym. 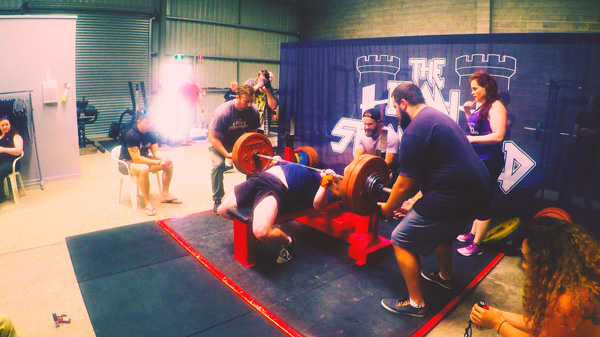 Big Troy Wilson. Troy had a great comp prep and started the day looking strong. Troy is someone who will support anyone, he’ll help anyone, he’ll introduce himself to everyone and is always a great supporter of the gym. Unfortunately Troy was unable to finish his deadlifts due to severe ab cramps after Squatting and Benching. But Troy’s strength not only lies in his physical capability but also in the capacity of his character. He hit a 180kg Squat and a 135kg Bench Press, staying around at the end of the day to support his fellow gym members. Great work Troy, next time we’ll nail it and get a big total that you’re definitely capable of. 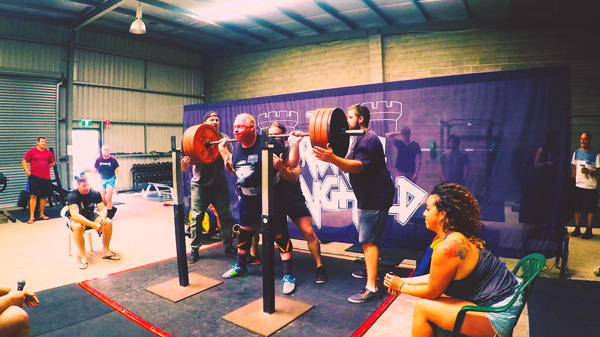 Extra mention to Jess Ford and Marcelle De Almeida who jumped in mid-way to have a crack at a single lift event. Jess hit a 75kg Bench Press and Marcelle hit a 115kg Deadlift. Smooth lifts girls! 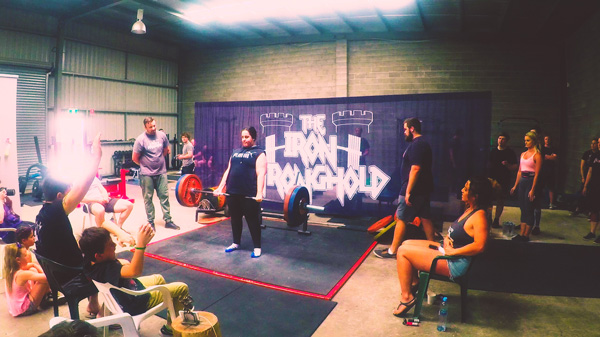 That concludes our lifters for the Stronghold Showdown! I love these competitions just as much as the big ones. This is where the up and comers make their debut. This is the young kid shooting hoops in his backyard, the young squire practicing his sword swings against trees, where the Stronghold’s next big lifter can look back in years to come and remember that this is where it all began. Every one of the strongest lifters all started somewhere. These comps are that somewhere.

A massive shout out to Nik, Victor, Loureen, Adam, Will and Marcelle who stepped up to help spot, load, judge and desk for the day. The comps don’t run without you. On behalf of all the competitors I thank you!

Thank you to all the spectators that came to support the lifting! It means a lot to the lifters to have everyone behind them. We hope you enjoyed the show and will see you next time!